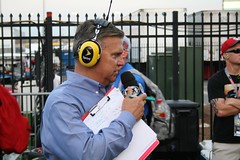 It doesn’t seem like that long ago that NASCAR media, fans and crew were welcoming back Fox Sports on-air personality Steve Byrnes after a bout with head and neck cancer.

Unfortunately, it was announced today that Byrnes’ cancer has returned. Effective immediately, he is focusing on his health, suspending his Fox Sports 1 duties co-hosting NASCAR Race Hub and play-by-play commentary of the NASCAR Camping World Truck Series broadcast. 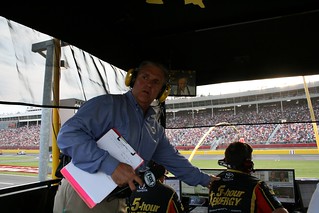 I had the pleasure of seeing Byrnes back in action last time NASCAR came to Charlotte Motor Speedway. From Bowyer’s pit-box I got to get a behind-the scenes glimpse at how the pit reporters approach and interview the crew chief mid-race when he ascended the 5-Hour Energy to talk to the No. 15 crew chief, Brian Pattie. Pattie responded over the noise that he’d do the interview down in the ground, rather than in his seat on the pit box.

I got to see Byrnes interview Pattie from above, and then seconds later, the pit box DirecTV-tuned television broadcast the interview. It was both cool and surreal.

Later I shared the pic above an to the right on Twitter and Byrnes and responded back. I wish I had the chance to meet him.

The point of all this, was that it was an honor seeing Steve Byrnes work the Charlotte Motor Speedway pits during the Coca Cola 600. He obviously loves what he does, and is passionate about the sport we love.

The ClosetNASCARFan clan has Steve Byrnes in our thoughts and prayers, and hope you’ll do the same. Get well soon, Steve. I hope to see you trackside soon.

Two Wins For Hendrick Motorsports in 2014; Neither From the 48

5 thoughts on “Thoughts And Prayers For Steve Byrnes: My Brief Brush With Byrnes”