At the end of August, my family spent a three-day weekend in Charlotte, with pretty much all the activities (except eating and sleeping) surrounding around NASCAR. I’ve already written about our first two NASCAR stops in the greater Charlotte area — tours of Michael Waltrip Racing and Hendrick Motorsports. Check those out if you haven’t already.

But the real reason we came down were two events at Charlotte Motor Speedway. The first was Rusty Wallace Racing Experience Ride Along my wife and I purchased.

After squeezing in the two shop tours, we headed from Hendrick Motorsports down the road in Concord to Charlotte Motor Speedway. The mile and half track is big, but being the first superspeedway I’d been to and seen up close, it’s just massive beyond words. The oval track itself is 1.5 miles, but the structure ends up even larger than that with the stands, parking and misc facilities surrounding it.

Driving around the outer roadway circling the track, we drove around to the other side of the track, signing in with a guard before driving through the tunnel, and into the massive infield of CMS. The infield was massive, but almost completely empty. Off to our left were the garages, media center, and behind them, the scoring tower. We saw two semis — one a Rusty Wallace Racing Experience Truck, and the other, a Richard Petty Exotics truck (they were using the road course of CMS).

We parked, and walked over to where a trailer had been setup for registration, purchasing merchandise, etc. Right off of Pit Road, tents were also setup for spectators and drivers/riders when waiting. We quickly signed our waivers, found our Living Social vouchers and went to wait for our ride alongs.

Pit Road was separated into two sections: the front four cars, consisting of a No. 20 red generic RWRE car, an 88 National Guard car, a 48 Lowe’s and a 29 Jimmy John’s were newer, cleaner and more modern looking, while the remainder of the field behind were as a whole, and a little more dingy and a little older.

It turned out the front four cars were the ride along cars, driven by experienced professionals. The remainder of the cars parked two wide behind them on Pit Road were the cars piloted by RWRE “students.”

We weren’t required to put on fire suits as passengers of the ride along, so we didn’t, as it was a late August afternoon. 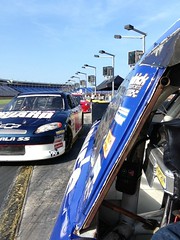 After getting cinched down tight in the five-point harness, they put my window net up, along with my driver’s and the car was fired up. The same was happening one car back with my wife in the 88 car. Very quickly my driver rocketed down Pit Road, getting the car up to speed, quickly getting up onto the banked part of the track. As we accelerated, we came out of turn 2 of Charlotte Motor Speedway’s track to face a Dewalt No. 17 car facing us toward the bottom of the track. Around this time, the yellow caution lights on the catch fence came on around the mile and a half track and my driver eased up on the throttle, taking us around and then back down pit road and back into our pit stall.

He powered down the car and he intimated that we’d now have a wait on our hands. Turns out the No. 17 car was one of the RWRE participants who had lost control of his car and had actually made contact with the inside wall. The nice thing about the caution pit stop was it allowed me to shoot a couple pictures from within the car and looking out of it. 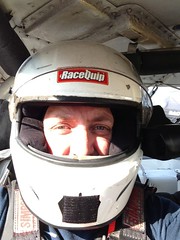 While we sat there, our window nets were dropped and a little bit of a cross breeze happened in the car as we sat there baking, waiting for the track to be cleared. Several times, they came over to check on us, seeing if we needed water. They also opened little doors on the hood of the car to visually check on the status of the tire. My driver said that the tires could go south pretty quickly.

Probably after 10-15 minutes, we were cleared to go back out on the track, and my driver really floored it. While it was aggressive going out the first time, he wasn’t pulling any punches on the second run. We were up on the track in no time, and man, what a rush. He was able to go high on the track and dive through the turns, taking a fast line on each of our laps around the speedway. The feel, sights and sounds in the car were awesome. The real rush though, came every time we quickly came up on and overtook one of the RWRE drivers. My driver, always passing on the right did so swiftly and closely. It was an absolute rush. 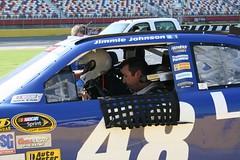 Later I found out my driver was a pit crew member for Brian Vickers. I’d love to know who he was and what his job is on the 55 car (or I guess it could be on his 20 Nationwide car), especially since I’m a big Michael Waltrip Racing fan. If anyone knows of a driver who works on a Vickers crew and also races for the ride alongs for Rusty Wallace, I’d love to know more about the guy.

I also later found out that my wife’s driver was doing his first laps around Charlotte and was following my driver’s lines, though at slightly lower speeds. 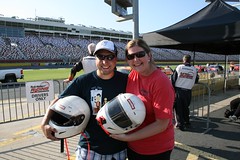 The ride along was a rush, and I’d gladly do it again at Charlotte or another NASCAR track. But the real rush would come the next night when I was behind the wheel. Stay tuned for that post, where I got to hop in the driver’s seat for my own laps around Charlotte Motor Speedway.

My Fantern Video Submission for the MWR Contest