Ever since my first experience in-person with NASCAR a few years ago, my son and I have both been into NASCAR die cast collecting. Track side on pole day of the fall 2012 Martinsville Speedway race, I got my first 1:24 NASCAR die cast — an autographed Kasey Kahne Hendrickcars.com black and blue car.

Since then, my collection has ballooned, adding a bunch of 1:24 scale cars (with a handful of autographed ones), but my son and I have both independently maintained growing 1:64 die cast collections as well. 1:64 scale is comparable to Matchbox/Hot Wheels cars. The past few seasons, I’ve made it a habit of rearranging my set of active driver cars in my home office to their finishing order from the most recent race. 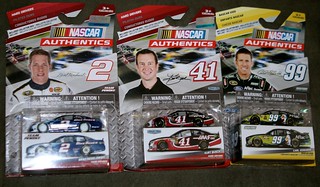 In the 1:64 NASCAR die casts there are two players — the Lionel ones that basically you can only get trackside, at NASCAR race shops and online at NASCAR.com and other NASCAR-related online shops. But then there’s NASCAR Authentics. They’re more attainable in most towns. I’ve come across their die cast offerings at Target stores, Wal-Mart, Toys R Us and even once saw them at Walgreens. The NASCAR Authentics cars tend to be sold a little cheaper as well — usually around $4.99 for a single 1:64 car versus the $7.99 or so price tag of the Lionel ones.

The Chase Authentics cars, usually found alongside of the Hot Wheels in the toy section are packaged similar to the Hot Wheels as well, hanging on a hook. Starting in 2014 though, the peg-hooked packages were upgraded with a collector’s box similar to the ones the Lionel 1:64 die casts sell in trackside and at race shops. The oddity though with this is the true collector is unlikely to open the package to get at the so-called collector’s box. While the upgrade is commendable, it’s unlikely to be the way many display their Chase Authentics cars. In our household, they’re either out of their package, or still in the original peg hook package. 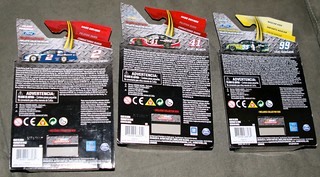 Once out of the package and side-by-side with the competitor, the big noticeable difference in the two brands is the car’s dimensions. The Chase Authentics exhibit a wider body and a slightly shorter profile, but not out of whack from the true dimensions. To be completely picky, the Lionel cars are the more realistic in dimensions, but the Chase Authentics ones aren’t too off.

The recent batch of cars you’re likely to find in-store include mainly Chevrolets, with a few Fords. The most prevalent are the No. 88 Kelley Blue Book paint scheme of Dale Earnhardt, Jr., along with a No. 3 Dow Austin Dillon car, a McDonalds No. 1 of Jamie McMurray, a Jimmy Johns No. 4 of Kevin Harvick and a No. 21 Trevor Bayne Ford.

You’ll also likely currently come across a historical No. 3 car of Richard Childress — not Richard Childress Racing, but rather a young Childress as a driver way before he was an owner. There’s also a No. 6 Trevor Bayne Nationwide Car and a No. 88 test car currently on the toy peg hooks. Each of these newest cars have a category/theme marked on them — things like “Hard Drivers,” “Fast Food,” and “Test Series.” As far as I could tell, the test series is a test in itself, currently consisting only of the No. 88 test car which features a very minimally paint scheme like the ones you’d see at Goodyear tire tests. The “Fast Food” category includes the Jimmy Johns and McDonalds cars.

There’s even a “NASCAR Kids” category that features paint schemes like Jimmie Johnson’s Build and Grow Monsters University theme, and the Aflac duck theme of the No. 99 piloted by Carl Edwards. 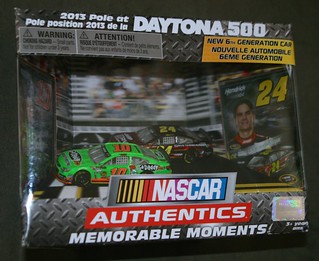 Chase Authentics 2014 multi-car offerings consisted of 2-pack “Memorable Moments” and single driver three packs. Both seemed to be exclusively available at Toys R Us, or at least in the Raleigh-Durham area. The two pack themes centered around the 2013 Daytona 500 qualifying session, consisting of Danica Patrick’s pole winning car, and Jeff Gordon’s runner up No. 24 car.

The other dual package is the 2013 Daytona 500 first and second-place finishers of Hendrick Motorsports ‐ Jimmie Johnson and Dale Earnhardt, Jr. The wedged packaging of the “Memorable Moments” package also feature what looks to be a trading card of each of the included drivers. I’m not entirely sure if they are double-sided cards or not, as I’ve not opened either of the dual-packaged cars in my possession. 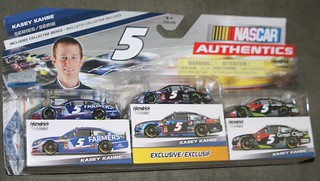 The initial offerings of the three pack die cast collectables again are Hendrick Motorsports, featuring Jimmie Johnson and Kasey Kahne. While two of the three cars are available for sale in the standard single packaging, the three-packs entice collectors by having an exclusive car. Kahne’s is Pepsi Max No. 5, while Johnson’s is the Jimmie Johnson foundation paint scheme.

Overall, the Chase Authentics die cast offerings are evolving. They should be commended for continuing to make diversifying their product and for getting it in stores available in most towns across the United States. The hope is they’ll keep evolving and further increase the diversity of NASCAR products they create. There’s definitely a slant towards Hendrick Motorsports, but that’s likely a no-brainer economic choice. HMS fans (especially Junior Nation) are likely to buy, so Chase Authentics are going for the cars first that make the most sense. I don’t know the full story on whether Lionel has exclusives on certain teams and paint schemes, but it’s probably likely. So this is bound to affect what cars they are able to produce.

That being said, I’d love to see further diversity in teams. It’d be cool to see the two TRD-powered Toyota teams (Joe Gibbs Racing and Michael Waltrip Racing) represented with Chase Authentic Gen 6 cars. It would be even cooler to see Chase Authentics try to negotiate to offer some of the second and third tier Cup teams — cars like Josh Wise’s No. 98 or the No. 7 of Michael Annett. While a casual fan isn’t going to snatch these up die-hard NASCAR fans and die cast collectors would love to see more of the Sprint Cup field filled out in their 1:64 scale die cast collection.

Chase Authentics has also toyed with offering a few Nationwide cars. I’d love to see that expanded as well into the Xfinity series era, along with some of the Camping World Truck series.

Is Chase Elliott Destined to Drive the No 9 Again?

Had a Blast at the 2014 Coca Cola 600 With Michael Waltrip Racing Teams!